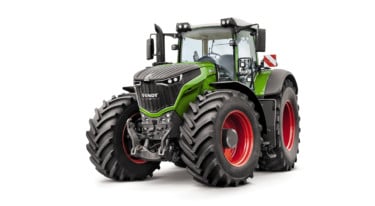 How can one best support the commitment of hunters and farmers to a healthy environment and biodiversity? This question has been answered by Fendt and J.P. Sauer & Sohn in a unique way never attempted before by any gunmaker – ever. In close cooperation with Germany’s oldest gunmaker, the longtime agricultural machine manufacturer from Marktoberndorf in the Allgäu has created a so-called theme rifle based on Germany’s Number 1 large tractor transposed to the most sophisticated hunting rifle in the world.

We hereby introduce the S 404 “Fendt 1050 Vario”, a completely new interpretation of the meaning of the word “customized” as it applies to the gunmaker’s art. Small game animals are the ones who will profit the most from this one-of-a-kind project since this shootable Fendt “Diesel horse” is a donation to benefit the German Hunting Association’s (DJV) project “Network Open Fields Biosphere”.

Going once, going twice, sold: The Sauer 404 “Fendt 1050 Vario” auction is over and was a milestone in the history of online-weapon-auctions. The Waffen Kuhlmann Company from 49577 Ankum gained the award of 30,050.88 € by order of a bidder who prefers to remain anonymous.

The delegates’ interest was already huge at the unveiling of the unique weapon from Isny at the Federal Hunters’ Convention 2019 in Berlin. The media responded at least as quickly and ample. The reaction from hunting-, riflemen- and agricultural media was distinctly noticeable by the cooperative partners’ business segments: On one side Fendt, the traditionally rich agricultural engineering manufacturer, and on the other side J. P. Sauer & Sohn, Germany’s oldest hunting rifles manufacturer.

The German hunting association’s premium partner selected Auctronia – one of the most modern and well-known auction platforms for hunters, collectors, and riflemen – to commence marketing measures. “To everyone’s delight, this auction has attained an extraordinarily high coverage and was the biggest visitor magnet in the history of Auctronia.” says Jochen Kistner, E-Commerce manager at Frankonia and responsible for Auctronia’s auction platform. More than 129 000 visitors have called up the auction page by the end of the auction; a total of over 100 bids have been received, and the average residence time at “Fendt 1050 Vario” was three times as long as for other repeating rifles at Auctronia.

This huge interest can also be confirmed by Matthias Klotz, Chief Executive Officer at J. P. Sauer & Sohn: “The auction has had an impact comparable to the profile that a Fendt 1050 leaves in soft earth! Interesting parties from all over Europe have contacted us, either to participate at this auction directly, or to offer suggestions for additional theme-rifles. Amazing, how multifaceted the scope was, here! “ Peter-Josef Paffen (chief executive officer at AGCO/Fendt) hope to spark the enthusiasm of huntsmen and huntswomen and to generate a top total donation for the DJV project “Network wildlife/natural habitat open country” have hence been more than satisfied. Participants from hunting, environmental protection, apiculture, and energy industry have already cooperated in the network project wildlife/natural habitat open country since 2012. The declared objective is the cultivation of energy plants that can be used as biomass for energy production, in the end, and to interconnect them more closely with wildlife- and nature preservation. The network’s newest idea is the cooperation project “Mulitcolored Biomass” between the German hunting association, German wildlife trust, and VEOLIA in April 2019.

In order to stop the loss of biodiversity in the open country, and within the project’s framework, high-yield, multi-annual wild plant mixtures should replace 500 hectare corn for biomass production in the forthcoming five years.

“The proceeds for our “404 1050 Vario” now generate an addition 240 hectare”, says a very pleased Sauer CEO, Matthias Klotz. “This makes us very proud because together with our colleagues at Fendt, and Auctonia we could not have shown more effectively, remarkably, and successfully that the partnership with hunters and farmers is not simply a slogan, but, rather, a living company philosophy.